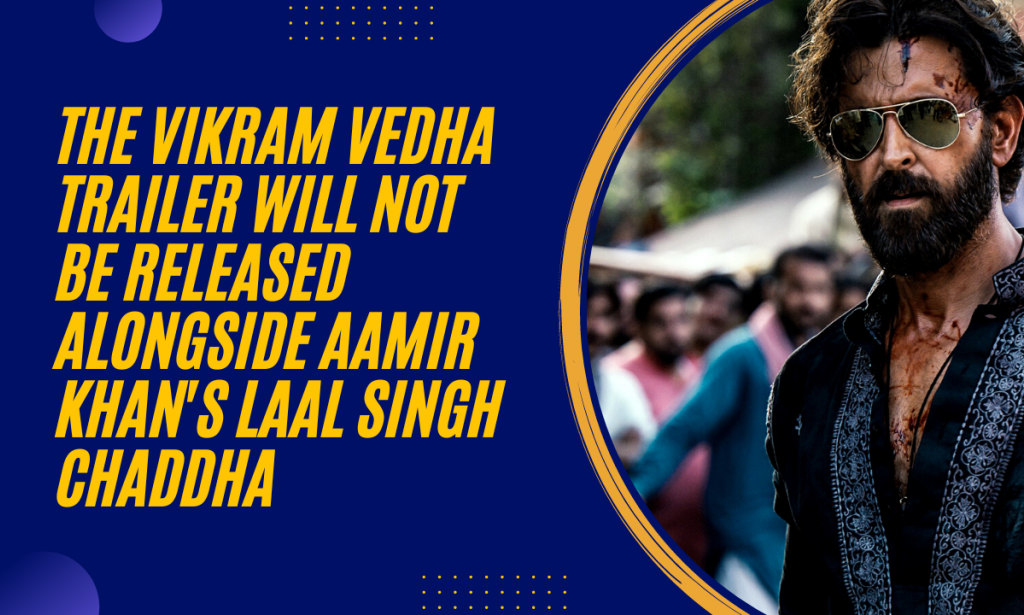 The Vikram Vedha trailer will not be released alongside Aamir Khan's Laal Singh Chaddha. There are several reasons for this! Makers Want To Unveil It All With Fireworks?

The Vikram Vedha trailer will not be released alongside Aamir Khan's Laal Singh Chaddha. There are several reasons for this! Makers Want To Unveil It All With Fireworks?

The creators of Vikram Vedha, starring Hrithik Roshan and Saif Ali Khan, were said to be releasing the trailer with Aamir Khan's recent flick Laal Singh Chaddha. The film, which also stars Kareena Kapoor Khan, Mona Singh, and Naga Chaitanya, will be released in theatres on August 11. Before the film's debut, netizens called for a boycott due to Aamir's previous inflammatory remarks regarding India.

For the uninitiated, rumours stated that Hrithik and Saif's initial rushes would be carried with Laal Singh Chaddha, but right before the release, the directors chose otherwise. Many people have been asking why the Vikram Vedha trailer was not carried with Laal Singh Chaddha, according to a new report. According to a report in the ETimes, when the creators viewed the trailer for Aamir Khan's film, they decided it needed to be rewritten.

According to the article, "Team 'Vikram Vedha' watched the final trailer and believed it needed to be rewritten." The film turned out fairly good. As a result, the crew wanted the trailer to arrive with all guns blazing. The crew believed that the film itself needed a bit more editing to make it crisper, thus the trailer may have to be rewritten. As a result, they delayed its release until August 11."

Hrithik Roshan, actor of Vikram Vedha, was recently in the headlines for his support of Aamir Khan's film. He posted on his Twitter account, "Just saw LAAL SINGH CHADDA. I sensed the movie's HEART. Aside from its flaws, this film is just fantastic. Guys, don't pass up this opportunity! Go ! Go now . Take a look. It's stunning. Simply stunning."

Hrithik Roshan's post, however, backfired, prompting netizens to demand for a boycott of his next film Vikram Vedha. Pushkar-Gayathri wrote and directed the film, which is a remake of a South film of the same name.